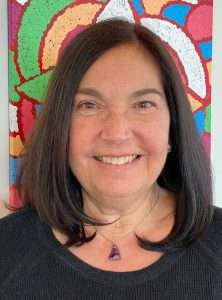 Tara Goldstein is the Artistic Director of Gailey Road Productions, an independent theatre group that produces research-informed theatre on social and political issues that affect us all. Tara is also a professor, ethnographer and playwright in the Department of Curriculum, Teaching and Learning at the Ontario Institute of Studies in Education, University of Toronto. She graduated from the MFA Playwriting Program at Spalding University, Louisville, Kentucky, in November 2006.

Tara’s play Castor and Sylvie, about feminist writer and philosopher Simone de Beauvoir and her companion Sylvie Le Bon, was staged as a workshop production at the 2015 SummerWorks Festival in Toronto and then as a staged performance at the L Fest in Llandudno, Wales in 2018.

Tara’s latest play Out at School written with Jenny Salisbury and Pam Baer is a verbatim theatre piece based on interviews undertaken with LGBTQ families about their experiences at school. Out at School was also staged at the L Fest in Llandudno, Wales in 2018, and as part of the Toronto Pride Festival in June 2019.

Pam Baer works with Gailey Road Productions as a Director and Artist Researcher, and is a theatre and media artist who focuses on community engaged work. Drawn from a young age to storytelling as a way of connecting people and building community, her work revolves around personal narratives, oral histories, and life stories. Pamela has facilitated applied theatre and community arts projects with diverse groups, and wide reaching themes, in England, Ghana, and Canada.

Margot Huycke works with Gailey Road Productions as the Producer of our Women Writing Letters literary performance series. The series ran for four seasons from 2011-2014 and in the fall of 2016 hosted a fundraiser for The CASA Award. Margot taught geography at Danforth Collegiate and Technical Institute in Toronto and is an avid recreational hockey player.

Jenny is a Toronto-based theatre artist and educator who also works with Gailey Road as a Director and Artist Researcher. She holds an MA in Text and Performance from RADA and King’s College, London, and is a graduate of the joint acting program at Sheridan College and the University of Toronto (U of T). She is pursuing a Ph.D. in devised theatre and community-engaged performance at the Centre for Drama, Theatre and Performance Studies at the University of Toronto.

Gillian is a graduate of Ryerson University’s Theatre – Technical Production program. Gillian has stage managed for Gailey Road Productions, since its creation in 2007, for their Fringe productions of Pound Predators (2007) and Lost Daughter (2008). She was the Production Manager for Harriet’s House (2010). Gillian is currently working at Hart House Theatre at the University of Toronto as their Education and Production Coordinator.

Jocelyn Wickett is graduate of the Theatre Performance program at Concordia University in Montreal, Jocelyn has been working as a performer, choreographer, director, activist and educator. Jocelyn works with Gailey Road Productions as a Director, and is currently teaching English and Drama at the Toronto District School Board. Jocelyn directed Pound Predators (2007), Lost Daughter (2008) and Harriet’s House (2010). . Most recently she directed Joanne Latimer (who played Harriet in Harriet’s House) in Washed Up at the 2015 Toronto Fringe Festival.